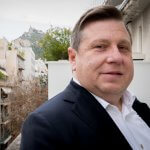 Alexandros Karakitis had been a tax partner of EY from 2007 until 2015 and has more than 20 years of experience in the tax profession, which was built by working from 1997 to 2002 as tax consultant and eventually tax manager at Arthur Andersen, from 2002 until 2015 as senior manager and tax partner of Ernst & Young and since 2015 as independent tax law practitioner.

During the last 20 years Alexandros has provided advisory and litigation services to several multinational companies as well as to individuals. He led in Greece and Southeastern Europe tax projects for prominent MNCs, mainly belonging to the Oil & Gas, Pharma, Consumer Products, Telecommunications & Media, Real Estate and Asset Management sectors. He coordinated major regional M&A and transfer pricing documentation projects and managed tax disputes leading to the revocation of tax assessments/refund of taxes assessed of millions of Euro.