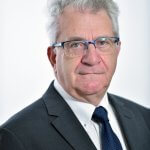 Mr.  Nicholas Simon Hammond is an English Solicitor who has been practicing law in Bucharest, Romania since January 1990.  He came to Romania in 1990 and moved there as a resident in 1994 to run the office of Taylor Joynson Garret when they decided to open an office in Bucharest.  Prior to that, he was the managing partner of a well-known Solicitors Practice in central London.  Following the move to Bucharest, Mr. Nicholas Hammond developed the practice of law in Bucharest working with teams of Romanian lawyers advising and assisting international clients who wished to do business in and also to open an office in Romania.  He acquired a wide-ranging knowledge of Romanian business practice and is able to apply this to his legal and business knowledge acquired in England.  He was aware that many English-speaking clients who came to Romania were particularly unaware of Romanian business practices which could lead to funny although sometimes worrying incidence.

He also worked on a number of European Union Funded projects in respect of Romania’s adhesion to the Acquis Communitare prior to Romania joining the European Union.  As the lead lawyer in Romania, he was responsible for the privatization from the legal perspective of seventy-five Romain companies under the amended privatization program.  He also assisted a number of foreign investors in respect of the acquisition of Romanian companies and the consolidation of businesses in the field of milk and dirty produce.

In 2004 he opens his own law firm based in Bucharest having been a consultant to English and US law firms who were considering opening an office in Romania.  He opened his own office to provide a more personal service to incoming clients to Romania and the Balkans who were looking not only for legal assistance but also an insight into Romania both at the business level as well as culturally.  Hammond & Associates has over the years built up a reputation in Romania for providing pragmatic and practical advice rather than being solely a purveyor of law.

In 1990 he became a founder member of the British Romanian Chamber of Commerce serving as the local chairman and subsequently as a director of the Board.  From his position in the Chamber, he was able to pass on insights to new members who joined particularly regarding what to do rather than not what to do.

He has seen the foreign Romanian community expand from a few members who formed a small club to what is now one of the largest business communities in Bucharest.  Through his first-hand knowledge and experience he is able to advise on setting Romanian companies in their various formats; business and commercial agreements as well as financing and banking arrangements.  He has advised small startup companies as well as public quoted companies.  He has been involved in a number of M&A transactions in Romania over his time in Bucharest.

His Firm Hammond partnership has grown over the years by providing expert knowledge and experience on all matters regarding the laws and legal system of Romania.  His team of Romanian lawyers are experts in their own fields and continue to develop and apply their knowledge for the benefit of Clients in Romania and those considering investing Romania.

His blog www.romanianlawblog.com has become a read for many foreign investors in Romania as well as those considering investing in Bucharest and Romania.  The blog covers many areas of law as well as his comments on the business life in Romania.

Nicholas Hammond can be contacted on bucharest@d-b-in.com.