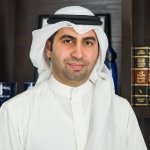 Dr. Faisal Alfahad aims to provide advisory and legal services distinct and leading in the financial and business sectors. Dr. Faisal Alafahd received a scholarship from Kuwait University to study for his master’s and Doctorate degrees in Tax Legislation from the United States of America. Further, he worked as Senior Assistant at Deloitte Amsterdam then he joined the Kuwait University Law School in the field of public finance and tax.

Dr. Faisal Alfahad also participates in drafting and reviewing the rules and regulations of the Institute of Banking Studies. Dr. Faisal Alfahad was appointed as legal advisor to the Central Bank of Kuwait handling all areas related to the field of banks operation and investment in addition to participating in the preparation of the Gulf Monetary Union and the Gulf Monetary Council treaty and related regulations within the group of legal experts in the central banks and monetary institutions in the GCC. Dr. Alfahad was appointed as Commissioner and member of the Board of Commissioners of the Capital Markets Authority in the first Board for two consecutive terms where he contributed to the preparation of most of the regulations and resolutions related to the capital markets, including the Executive Bylaw and contributed to the drafting of amendments to the capital market law.

Dr. Alfahad participated in many committees at the level of the State, including his membership in the Committee to study the economic and social effects of the implementation of the comprehensive tax project in the State of Kuwait – the Ministry of Finance. Dr. Alfahad chaired the UNCAC Implementation Review Group on the Governance and Anti-Corruption Program between the State of Kuwait and the World Bank. In addition to being a member of the national expert group in reviewing the implementation of the United Nations Convention against Corruption in the Council of Ministers.

Dr. Alfahad was also selected as a consultant to the United Nations Development Program (UNDP) to prepare a study on ways to promote transparency and accountability in the Government’s program. Besides, assuming the presidency and membership of some investigation commissions