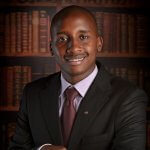 Austin is a diversely experienced Commercial Lawyer with a deep interest in Corporate, Labour and general Commercial transactional lawyering. He is a dynamic and resourceful thinker who can be relied upon when it comes to matters legal. A social and people person with soft leadership skills and derives much satisfaction from seeing and participating in growth both on personal and organizational levels.

Austin’s first formal engagement was in early 2010 at Mazars Kenya, an Audit and advisory firm, as a Company Secretarial Assistant within its Company secretarial arm, Emu Registrars. While at Mazars Kenya, part of his assignments included Registration of Limited Companies, NGO’s and Welfare groups, preparation for and attendance of Board meetings and AGM’s and safekeeping/management of Statutory and compliance documents. In addition to that, he was involved in particular assignments such as Restructuring of various entities, (Mali Rasili Limited), the preparation of Information Memoranda and Prospectus (Jamii Bora Bank Rights Issue), reclassification of Shares and attendant Rights (East African Cables Limited, Resolution Health E.A), Conducting Rights Issues and eventual listing on the Nairobi Stock Exchange (TransCentury Limited) among many others.

He later joined Invesco Assurance mid 2013 where he oversaw commercial transactions, managed Labour matters in conjunction with external lawyers, assisted the Company Secretary in the preparation and facilitation of the Board Agenda and meetings, safeguarding the Corporate interests of his employer including ensuring Statutory compliance and reporting besides advising on the legal ramifications of new legislation within the relevant sectors. While at Invesco, Austin oversaw the registration of a Savings Sacco for the benefit of the staff thereafter serving as the inaugural Chairman of the first management committee.

After about three years at Invesco Assurance, Austin left formal employment and ventured into private legal practice and management of family business besides dedication of time to community service.

Austin is a stanch Rotarian, an avid rugby fan/part-time player and a strong believer and proponent of selfless service to the community around him.