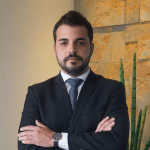 Pedro Franco Mourão is a lawyer specialized in business law and civil law. After his graduation, he practiced for four years in a large law firm in Brazil, where he supervised the consulting and litigation team in civil law. While attending a master’s in law, he was hired as the manager of the corporate law area of a prominent law firm in Brazil, where he practiced for two years.

Pedro Franco Mourão is Masters in Business Law (LL.M), has an MBA degree in Civil Law and Civil Procedure, and is post-graduated in tax management. Due to his academic background, he has published several articles and is a co-author in several legal books. He recently became a columnist for an important legal magazine in Brazil called Capital Aberto and Legisção e Mercado.

Due to his substantial experience, Pedro Franco Mourão is a member of the WorldWide Lawyers Association (WLA) and practice in international cases. In his last international experience, he supported a deal for a Brazilian construction company to start its business in Oman.

Pedro Mourão, in the last few years, has been specializing in Arbitration and focused his practice on cases of great economic value. Due to his experience, he became co-author of arbitration books and is fully capable of practice in international arbitrations cases.

In 2018 and 2019, Pedro Franco Mourão was awarded by the prestigious magazine Análise Advocacia 500, as one of the most admired lawyers in Brazil.