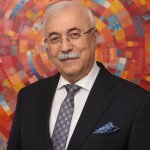 Vladimir Penkov is currently ranked as an eminent practitioner in many renowned legal editions like Chambers & Partners, Legal 500, IFLR 1000, etc. Mr. Penkov is among the most prominent and highly respected professionals in the Bulgarian legal market and has advised or led PM&P’s legal team, assisting many of the significant transactions on the Bulgarian market for more than 30 years.

In 2017, Mr. Penkov was admitted to the list of registered European lawyers at the Vienna Bar Association.

A longtime arbiter at the Bulgarian Chamber of Commerce and Industry and Vice President (1999 – 2006), Mr. Penkov has been selected as Lawyer of the Year and nominated by many international publications as a leading lawyer.

He featured in many issues of Who is Who of the world, including Leaders for the New Century: