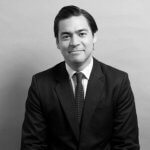 Chris was originally admitted as a solicitor in England & Wales and worked in London for an award-winning and highly regarded firm established in 1881.  He specialized in commercial and corporate advisory services in addition to a broad range of commercial litigation disputes in the Royal Courts of Justice (High Court) as well as County Courts. He acted on behalf of various small, medium and large domestic and international corporations, as well as high net worth individuals, before being admitted as a solicitor in New South Wales, Australia.

In Australia, since 2013, Chris has worked for a large Australian corporate law firm where he specialized in intellectual property and general corporate law matters.  He has acted for large corporations, the Australian Stock Exchange top 200 companies, mid and small caps, as well as government enterprises and regulatory bodies.  In addition, for three years, he was retained as general counsel to the Migration International Group, a leading and pioneering migration agency and a group of companies (including a Finalist in the 2017 LexisNexis Legal Innovation Awards) operating in Australia, New Zealand, United States of America and Europe.  As such, he has a deep understanding of the commercial needs of businesses from their legal advisor. In concert with the experienced and well-respected business minds of the Migration International Group, Heathfield Grosvenor was established to deliver efficient, cost-effective representation to its domestic and international clients so as to enable them to traverse the Australian legal landscape and establish business operations with overseas connections.